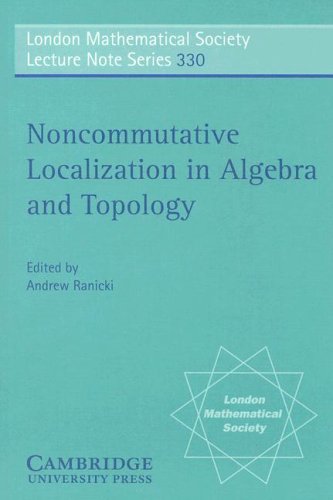 Noncommutative Localization in Algebra and Topology
by Andrew Ranicki

Topology and Physics: A Historical Essay
by C. Nash - arXiv
In this essay we wish to embark on the telling of a story which, almost certainly, stands only at its beginning. We shall discuss the links and the interaction between one very old subject, physics, and a much newer one, topology.
(10751 views)

Lectures on Sheaf Theory
by C.H. Dowker - Tata Institute of Fundamental Research
A sheaf is a tool for systematically tracking locally defined data attached to the open sets of a topological space. Contents: Sheaves; Sections; Cohomology groups of a space with coefficients in a presheaf; Introduction of the family Phi; etc.
(7121 views)

Exact Sequences in the Algebraic Theory of Surgery
by Andrew Ranicki - Princeton University Press
One of the principal aims of surgery theory is to classify the homotopy types of manifolds using tools from algebra and topology. The algebraic approach is emphasized in this book, and it gives the reader a good overview of the subject.
(7179 views)