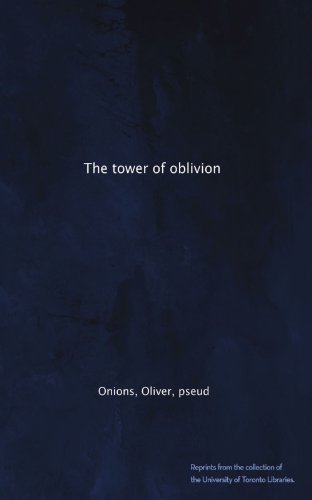 The Tower of Oblivion
by Oliver Onions

Description:
An extravaganza based on the juvenating gland and its endless possibilities. The Boston Herald calls it 'A novel of topsy-turviness in man's aging process, so original in its conception that it would be a pity to summarize it for you--written with distinction of manner as well as of matter.'

The Jungle
by Upton Sinclair - Grosset & Dunlap
A vivid portrait of life and death in a turn-of-the-century American meat-packing factory. A grim indictment that led to government regulations of the food industry, The Jungle is Sinclair's contribution to literature and social reform.
(13631 views)

The Everlasting Whisper
by Jackson Gregory - C. Scribner's Sons
This is the story of a strong man's struggle against savage nature and humanity, and of a beautiful girl's regeneration from a spoiled child of wealth into a courageous strong-willed woman. The book was first published in 1922.
(4927 views)

The Last Stoic
by Morgan Wade - Smashwords
This is a story about appetite and fear, both modern and ancient. Half of the story's narrative occurs in the time and place of the ancient Roman Empire; the other half occurs in the present-day United States, alternating from chapter to chapter.
(6049 views)