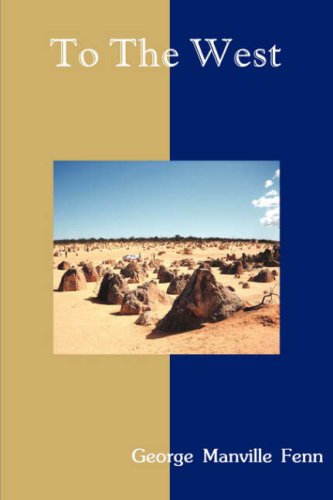 To The West
by George Manville Fenn

Description:
Mayne Gordon and Esau Dean, the two heroes of the present story, escape from a tyrannical master in the City, who thrashes them into a despairing rage and then prosecutes them for assault. After a good deal of trouble, the lads arrive safely in British Columbia. On the way out they pick up a one-eyed prospector, who proves their good angel in countless hair-breadth adventures, and finally--after trying unsuccessfully at gold-digging--the whole party become comfortable and prosperous settlers.

The Peril Finders
by George Manville Fenn
This is a long and excellent book. It starts in California, where several settlers had been trying to gain a living as fruit-growers, but the various blights and insects were getting the upper hand, and failure was in the air all round ...
(1399 views)

The Young Castellan: A Tale of the English Civil War
by George Manville Fenn - J. B. Lippincott
A Castellan is a person in charge of a castle, and that is what young Roy Royland has become, while his father is away defending his king. For the time is about 1640, and there is a move afoot in the country of England to do away with the monarchy...
(1097 views)

Seven Frozen Sailors
by George Manville Fenn - Project Gutenberg
I suddenly woke to the fact that in going close in to the visible part of the iceberg, we had sailed in over a part of it that was under water, and now the huge mass of ice having grown top-heavy, it was slowly rolling over...
(5245 views)

Diamond Dyke
by George Manville Fenn - W. & R. Chambers
A book about the difficulties a pair of young Britons faced when they went to South Africa, and set up an ostrich farm in the dry and largely empty veldt. They had a married couple of the locals to help them, and of these the man wasn't much use ...
(1054 views)