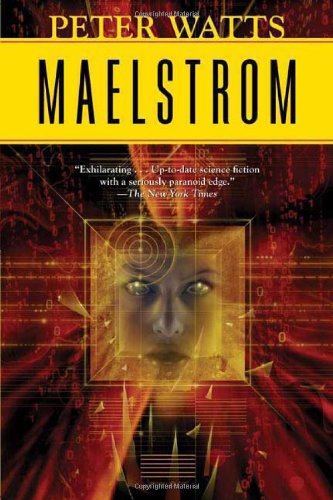 Description:
This is the way the world ends: A nuclear strike on a deep sea vent. The target was an ancient microbe -- voracious enough to drive the whole biosphere to extinction -- and a handful of amphibious humans called rifters who'd inadvertently released it from three billion years of solitary confinement. The resulting tsunami killed millions. It's not as through there was a choice: saving the world excuses almost any degree of collateral damage.

Prospero's Half-Life
by Trevor Zaple - Smashwords
Richard Adams loves his job -- or maybe he just wants to ignore everything that's going on outside of it. As the world rapidly turns into a plague-filled charnel house, Richard keeps on running his store as though nothing has changed ...
(4552 views)

Dominant Species
by Ben L. Hughes - Smashwords
A medical breakthrough has just changed the future of humankind forever. Under the biological enhancement program, ordinary people can live a life virtually free from disease and illness. The majority accepts the procedure and becomes augmented ...
(3686 views)

2120 Titus
by Razor Blade - Smashwords
A 17 km wide asteroid named 2120 Titus is heading towards a collision with Earth. A known object for over a hundred years, scientists struggle to understand why the asteroid is heading towards Earth and why it is emitting an intelligent radio signal.
(2241 views)

The Undeniable Labyrinth
by Alan Alaric Roi
This is the story of Althea Ram, exile from the remains of a vast galactic civilization, driven to unravel the truth of what caused the apocalypse that destroyed it - the wonders and horrors of her universe. It is a science-fiction oddyssey...
(4928 views)