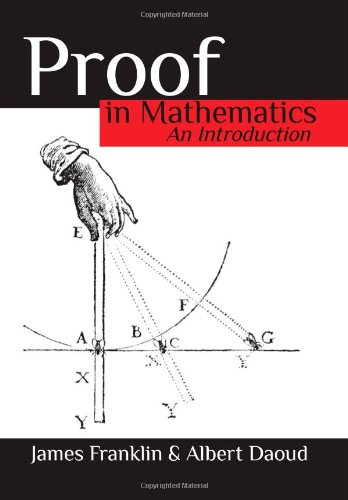 Proof in Mathematics: An Introduction
by James Franklin, Albert Daoud

Description:
This is a small (98 page) textbook designed to teach mathematics and computer science students the basics of how to read and construct proofs. The book takes a straightforward, no nonsense approach to explaining the core technique of mathematics.

An Inquiry-Based Introduction to Proofs
by Jim Hefferon - Saint Michael's College
Introduction to Proofs is a Free undergraduate text. It is inquiry-based, sometimes called the Moore method or the discovery method. It consists of a sequence of exercises, statements for students to prove, along with a few definitions and remarks.
(6941 views)

Proofs in Mathematics
by Alexander Bogomolny - Interactive Mathematics Miscellany and Puzzles
I'll distinguish between two broad categories. The first is characterized by simplicity. In the second group the proofs will be selected mainly for their charm. Most of the proofs in this book should be accessible to a middle grade school student.
(9654 views)