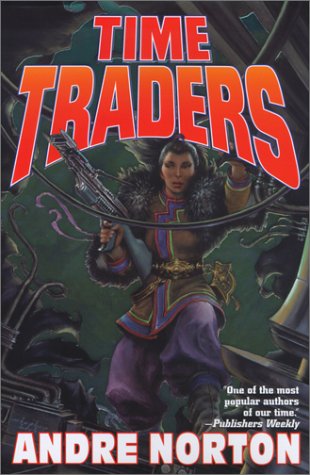 The Time Traders
by Andre Norton

Description:
When petty criminal Ross Murdock and Apache rancher Travis Fox separately stumble upon Operation Retrograde, America's top-secret time-travel project, their special skills come in handy in their new role as time agents, journeying back and forth in time from ancient Britain and America to the distant reaches of space.

The Big Time
by Fritz Leiber - Ace Books
Doctors, entertainers, and soldiers find themselves treacherously trapped with an activated atomic bomb inside the Place, a room existing outside of space-time. Leiber creates a tense, claustrophobic SF mystery, and a unique locked-room whodunit.
(2207 views)

A Connecticut Yankee in King Arthur's Court
by Mark Twain - Charles L. Webster & Co.
Satirical novel by Mark Twain, the tale of a commonsensical Yankee who is carried back in time to Britain in the Dark Ages, and it celebrates homespun ingenuity and democratic values in contrast to the superstitious ineptitude of a feudal monarchy.
(7844 views)

Time Crime
by H. Beam Piper - ManyBooks
A police procedural story, set in the world of the future. Human society has developed the technology to move laterally between parallel universes. The heroes of this story, Verken Vall and his wife, are ready to embark on a long-overdue vacation...
(4604 views)

Time Management for Mercenaries
by Dai Alanye
A mismatched team is recruited for primitive military action in a third world country. It is eventually revealed that they will, in fact, be journeying to the past. They run into many difficulties both before and after reaching their destination.
(6146 views)