The Winds of Time
by James H. Schmitz , 1962
Star ships, aliens from the future, time travel, romance, cannibalism, pet humans and mute-but-brilliant aliens... and of course, it's got a hero who solves every problem by being smarter and trickier and better-prepared than we'd ever imagine being.
(3439 views)

Project Mastodon
by Clifford D. Simak , 1955
Hudson lay in his sleeping bag, staring at the sky. There was not one familiar constellation, not one star that he could name. This juggling of the stars emphasized more than anything else the vast gulf of years which lay between him and the Earth.
(3707 views)

The Big Time
by Fritz Leiber - Ace Books , 1958
Doctors, entertainers, and soldiers find themselves treacherously trapped with an activated atomic bomb inside the Place, a room existing outside of space-time. Leiber creates a tense, claustrophobic SF mystery, and a unique locked-room whodunit.
(3330 views)

Key Out of Time
by Andre Norton - The World Publishing Company , 1963
Time Agents Ross Murdock and Gordon Ashe, aided by a Polynesian girl and telepathic dolphins, probe the mystery of the sea-planet named Hawaika. Its cities and civilizations have vanished but our agents are snatched back through a Time Gate ...
(3179 views)

The Defiant Agents
by Andre Norton - The World Publishing Company , 1962
Travis Fox, an expert in time travel, volunteers for a mission to colonize the planet of Topaz. But when he and his fellows find themselves reverting to the ways of their ancient warrior race, Fox suspects that a dangerous force is responsible.
(3544 views)

The Time Traders
by Andre Norton - The World Publishing Company , 1958
When Ross and Travis separately stumble upon America's top-secret time-travel project, their special skills come in handy in their new role as time agents, journeying back and forth in time from ancient Britain to the distant reaches of space.
(3310 views)

When the Sleeper Wakes
by H. G. Wells , 1899
A dystopian science fiction novel about a man who sleeps for two hundred, waking up in a completely transformed London. The main character awakes to see his dreams realised, and the future revealed to him in all its horrors and malformities.
(6677 views)

The Future People
by Carl Johnson - Smashwords , 2014
Kenneth and Savannah are classmates, regular teenagers, who are whisked away 50 centuries into the future to save over one hundred trillion lives and prevent the destruction of the human race. Only then will they be allowed to return home ...
(5062 views)

Time Crime
by H. Beam Piper - ManyBooks , 1955
A police procedural story, set in the world of the future. Human society has developed the technology to move laterally between parallel universes. The heroes of this story, Verken Vall and his wife, are ready to embark on a long-overdue vacation...
(5606 views)

Time Management for Mercenaries
by Dai Alanye , 2012
A mismatched team is recruited for primitive military action in a third world country. It is eventually revealed that they will, in fact, be journeying to the past. They run into many difficulties both before and after reaching their destination.
(7970 views)

Footsteps in Time
by Sarah Woodbury - Smashwords , 2011
In December of 1282, English soldiers ambushed and murdered Llywelyn ap Gruffydd, the Prince of Wales. His death marked the end of Wales as an independent nation. Footsteps in Time is the story of what might have happened had Llywelyn lived.
(18226 views)

A Connecticut Yankee in King Arthur's Court
by Mark Twain - Charles L. Webster & Co. , 1889
Satirical novel by Mark Twain, the tale of a commonsensical Yankee who is carried back in time to Britain in the Dark Ages, and it celebrates homespun ingenuity and democratic values in contrast to the superstitious ineptitude of a feudal monarchy.
(8934 views)

The Time Machine
by H. G. Wells - Project Gutenberg , 2004
The novel is considered one of the earliest works of science fiction and the progenitor of the 'time travel' subgenre. Wells advanced his social and political ideas in this narrative of a nameless Time Traveller who is hurtled into the year 802,701.
(14609 views)

Virtual Evil
by Jana G. Oliver - Dragon Moon Press , 2007
Jacynda's latest assignment is a double-edged sword: find the greatest of all Time Rovers and send him to 2057. If she returns Harter Defoe to the future, she ll be branded a traitor to her kind. If she fails, the punishment is a decade in prison.
(13512 views)

Sojourn
by Jana G. Oliver - Dragon Moon Press , 2006
Victorian London is a dangerous place for the unwary. Mysterious shape-shifters haunt the streets, making friend and foe indistinguishable. In a few days, Jack the Ripper will add to his bloody legacy. But he isn’t the only threat in Whitechapel.
(13118 views) 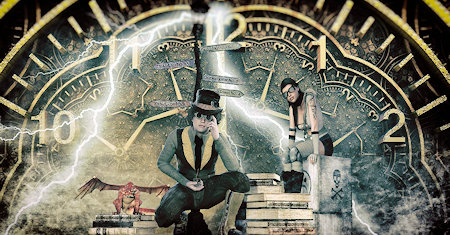