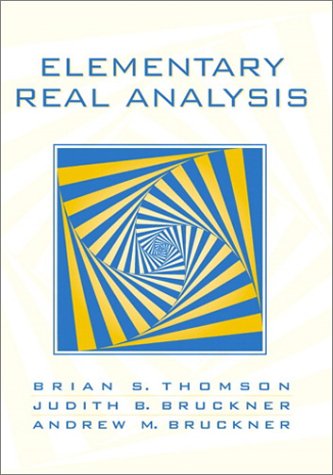 Elementary Real Analysis
by B. S. Thomson, J. B. Bruckner, A. M. Bruckner

Description:
Elementary Real Analysis is written in a rigorous, yet reader friendly style with motivational and historical material that emphasizes the "big picture" and makes proofs seem natural rather than mysterious. Introduces key concepts such as point set theory, uniform continuity of functions and uniform convergence of sequences of functions. Covers metric spaces. Ideal for readers interested in mathematics, particularly in advanced calculus and real analysis.

An Introductory Single Variable Real Analysis
by Marcel B. Finan - Arkansas Tech University
The text is designed for an introductory course in real analysis suitable to upper sophomore or junior level students who already had the calculus sequel and a course in discrete mathematics. The content is considered a moderate level of difficulty.
(8462 views)

The Theory Of Integration
by L. C. Young - Cambridge University Press
On the one hand, practically no knowledge is assumed; on the other hand, the ideas of Cauchy, Riemann, Darboux, Weierstrass, familiar to the reader who is acquainted with the elementary theory, are used as much as possible ...
(1252 views)

Irrational Numbers and Their Representation by Sequences and Series
by Henry Parker Manning - J. Wiley & sons
This book is intended to explain the nature of irrational numbers, and those parts of Algebra which depend on the theory of limits. We have endeavored to show how the fundamental operations are to be performed in the case of irrational numbers.
(3072 views)

Orders of Infinity
by G. H. Hardy - Cambridge University Press
The ideas of Du Bois-Reymond's 'Infinitarcalcul' are of great and growing importance in all branches of the theory of functions. The author brings the Infinitarcalcul up to date, stating explicitly and proving carefully a number of general theorems.
(6949 views)