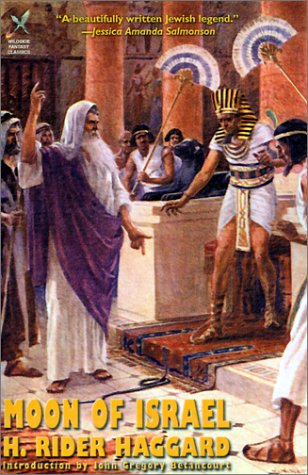 Moon of Israel: A Tale of the Exodus
by H. Rider Haggard

Description:
Moon of Israel is an amazing retelling of the Biblical story of the Exodus from the view point of Ana, the Egyptian scribe. Ana provides a down to earth naration of the ancient egyptian times during the reign of Pharoah's Meneptah, Amenmeses, and Seti. It is the story told from a different viewpoint that includes historical information, action, adventure romance, and internal struggles that are still seen in today's times.

The World's Desire
by H. Rider Haggard, Andrew Lang - ManyBooks
The story of the hero Odysseus after his untold second journey. Returning to his home, Ithaca, the region ravaged by a plague, his wife seemingly slain, Odysseus begins his final quest. This book might be called The Further Adventures of Odysseus.
(4718 views)

Jess
by H. Rider Haggard - ManyBooks
An African domestic drama set in Pretoria at the time of the Boer War. Captain John Niel comes to work on the Transvaal farm of a fellow Englishman, Silas Croft, and becomes involved in a love triangle of sorts with Croft's two nieces...
(3686 views)

King Solomon's Mines
by H. Rider Haggard - Cassell
Praised as the most amazing story ever written, it tells the tale in which Allan Quatermain, a gentleman adventurer, is hired to locate a man who has disappeared into the heart of Africa while hunting for the legendary diamond mines of King Solomon.
(9866 views)