Human and Machine Consciousness
by David Gamez - Open Book Publishers , 2018
This book sets out a bold interpretation of consciousness that neutralizes the philosophical problems and explains how we can make scientific predictions about the consciousness of animals, brain-damaged patients and machines.
(3675 views)

Interacting with Presence
by Giuseppe Riva - De Gruyter Open , 2014
The experience of interacting with the newest Virtual Reality technologies is affected by the extent to which we feel ourselves to be 'present' in computer-generated worlds. This volume provides an introduction to the topic of mediated presence.
(5023 views)

Bayesian Network
by Ahmed Rebai (ed.) - InTech , 2010
Bayesian networks are a general tool that can be used for a large number of problems involving uncertainty: reasoning, learning, planning and perception. This is a collection of contributions to the methodology and applications of Bayesian networks.
(6295 views)

Building the Second Mind: 1956 and the Origins of Artificial Intelligence Computing
by Rebecca E. Skinner - UC Berkeley , 2012
'Building the Second Mind' is a history of the origins of AI. AI, the field that seeks to do things that would be considered intelligent if a human being did them, was developed as a general concept over centuries - it is a constant of human thought.
(9121 views)

The Thousand Faces of Virtual Reality
by Cecilia Sik Lanyi (ed.) - InTech , 2014
Virtual Reality has high impact not only on research but on our daily living as well. This book has an aim to present applications, trends and newest development in three main disciplines: health sector, education and industry.
(5814 views)

Ethical Artificial Intelligence
by Bill Hibbard - arXiv , 2014
This book analyzes the issues of ethical artificial intelligence. The behavior of future AI systems can be described by mathematical equations, which are adapted to analyze possible unintended AI behaviors and ways that AI designs can avoid them.
(8379 views)

Computers and Thought: A practical Introduction to Artificial Intelligence
by Mike Sharples, et al. - A Bradford Book , 1989
The aim of this book is to introduce people with little or no computing background to artificial intelligence (AI) and cognitive science. It emphasizes the psychological, social, and philosophical implications of artificial intelligence.
(8985 views)

Design: Creation of Artifacts in Society
by Karl T. Ulrich - University of Pennsylvania , 2011
Design is conceiving and giving form to artifacts that solve problems. I use artifact in a broad sense to describe any product of intentional creation, including physical goods, services, software, graphics, buildings, landscapes, and processes.
(9527 views)

The World and Mind of Computation and Complexity
by Gregg Schaffter , 2013
With the increase in development of technology, there is research of human-like artificial intelligence that can be self-aware and act just like humans. This book explores how we may be close to developing a true artificially intelligent being.
(8405 views)

Virtual Reality: Human Computer Interaction
by Xin-Xing Tang (ed.) - InTech , 2012
Virtual reality has impact on information organization and management and even changes design principle of information systems, which will make it adapt to application requirements. The book aims to provide a broader perspective of virtual reality.
(12332 views)

The Age of Intelligent Machines
by Ray Kurzweil - The MIT Press , 1992
Visionary computer scientist Raymond Kurzweil probes the past, present, and future of artificial intelligence, from its earliest philosophical and mathematical roots to tantalizing glimpses of 21st-century machines with superior intelligence.
(12166 views)

Artificial Intelligence: Foundations of Computational Agents
by David Poole, Alan Mackworth - Cambridge University Press , 2010
A book about the science of artificial intelligence, it presents AI as the study of the design of intelligent computational agents. The book is structured as a textbook, but it is accessible to a wide audience of professionals and researchers.
(13276 views)

Ambient Intelligence
by Felix Jesus Villanueva Molina - InTech , 2010
In this book we analyze a selection of open problems which we consider the key ones in order to let ambient intelligence become a reality. This book provides the reader with a good idea about the current research lines in ambient intelligence.
(12968 views)

Autonomous Agents
by Vedran Kordic - InTech , 2010
The field of multi agent systems investigates the process underlying distributed problem solving and designs some protocols and mechanisms involved in this process. This book presents an overview of the research issues in the field of multi agents.
(9751 views)

Artificial Intelligence - Agents and Environments
by William John Teahan - BookBoon , 2010
This book is the first in a series on Artificial Intelligence. It provides an introduction to the topic with an emphasis on the use of agent-oriented design. Topics include agents, environments, agent movement, and agent embodiment.
(13448 views)

Artificial Intelligence - Agent Behaviour
by William John Teahan - BookBoon , 2010
This book adopts a behaviour-based approach to the design of agent-oriented systems. The topics covered from a behaviour-based perspective include agent communication, searching, knowledge and reasoning, and intelligence.
(13023 views)

The Quest for Artificial Intelligence
by Nils J. Nilsson - Cambridge University Press , 2009
Artificial intelligence is a field within computer science that is attempting to build enhanced intelligence into computer systems. This book traces the history of the subject, from the eighteenth-century pioneers to the work of today-s AI engineers.
(13973 views)

The Boundaries of Humanity: Humans, Animals, Machines
by J. Sheehan, M. Sosna - University of California Press , 1991
To the age-old debate over what it means to be human, the relatively new fields of sociobiology and artificial intelligence bring new insights. What have these two fields in common? Have they affected the way we define humanity?
(14195 views)

Affective Computing
by Jimmy Or - IN-TECH , 2008
An overview of state of the art research in Affective Computing. It presents new ideas, original results and practical experiences in this increasingly important research field. The book consists of 23 chapters categorized into four sections.
(11896 views)

Artificial Intelligence and Responsive Optimization
by M. Khoshnevisan, S. Bhattacharya, F. Smarandache - Xiquan , 2003
The purpose of this book is to apply the Artificial Intelligence and control systems to different real models. The text is designed for graduate students and researchers who are active in the applications of AI and Control Systems in modeling.
(13009 views)

Brief Introduction to Educational Implications of Artificial Intelligence
by David Moursund - University of Oregon , 2006
This book is designed to help teachers learn about the educational implications of current uses of Artificial Intelligence as an aid to solving problems and accomplishing tasks. The text is designed for self-study or for use in workshops.
(15248 views) 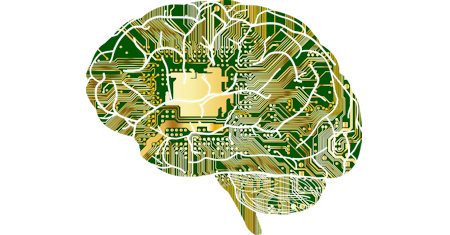