Random Differential Equations in Scientific Computing
by Tobias Neckel, Florian Rupp - De Gruyter Open , 2013
This book is a self-contained treatment of the analysis and numerics of random differential equations from a problem-centred point of view. An interdisciplinary approach is applied by considering both dynamical systems and scientific computing.
(1397 views)

Fractal Analysis
by Sid-Ali Ouadfeul (ed.) - InTech , 2019
The aim of this book is to show some applications of fractal analysis in the sciences. The first chapter introduces the readers to the book, while the second chapter shows the methods and challenges of fractal analysis of time-series data sets...
(1443 views)

Chaos Theory
by Kais A. Mohamedamen Al Naimee (ed.) - InTech , 2018
With a good background in nonlinear dynamics, chaos theory, and applications, the authors give a treatment of the basic principles of nonlinear dynamics in different fields. In addition, they show overlap with the traditional field of control theory.
(2627 views)

Data Assimilation: A Mathematical Introduction
by K.J.H. Law, A.M. Stuart, K.C. Zygalakis - arXiv.org , 2015
This book provides a systematic treatment of the mathematical underpinnings of work in data assimilation. Authors develop a framework in which a Bayesian formulation of the problem provides the bedrock for the derivation and analysis of algorithms.
(2695 views)

Dynamical Systems: Analytical and Computational Techniques
by Mahmut Reyhanoglu - InTech , 2017
There has been a considerable progress made during the recent past on mathematical techniques for studying dynamical systems. This progress is due to our increasing ability to mathematically model physical processes and to analyze and solve them.
(3127 views)

Extremes and Recurrence in Dynamical Systems
by Valerio Lucarini, et al. - arXiv , 2016
This book provides a comprehensive introduction for the study of extreme events in the context of dynamical systems. It provides an overview of the area, underlining its relevance for mathematics, natural sciences, engineering, and social sciences.
(2676 views)

Dynamical Systems
by Jose A. Tenreiro Machado (ed.) - MDPI AG , 2014
Complex systems are studied in many areas of natural sciences, social sciences, engineering and mathematics. This volume intends to contribute towards the dissemination of the multifaceted concepts in accepted use by the scientific community.
(3685 views)

Around the Boundary of Complex Dynamics
by Roland K. W. Roeder - arXiv , 2015
We introduce the exciting field of complex dynamics at an undergraduate level while reviewing, reinforcing, and extending the ideas learned in an typical first course on complex analysis. Julia sets and the famous Mandelbrot set will be introduced...
(3831 views)

Variational Modelling: Energies, gradient flows, and large deviations
by Mark A. Peletier - arXiv , 2014
The notes describe the methodology called Variational Modelling, and focus on the application to the modelling of gradient-flow systems. I describe the methodology itself in great detail, and explain why this is a rational modelling route.
(5942 views)

Complex Dynamics and Renormalization
by Curtis T. McMullen - Princeton University Press , 1994
Addressing researchers and graduate students in the active meeting ground of analysis, geometry, and dynamics, this book presents a study of renormalization of quadratic polynomials and a rapid introduction to techniques in complex dynamics.
(5877 views)

Stability Analysis via Matrix Functions Method
by A. A. Martynyuk - Bookboon , 2013
The monograph presents a generalization of the well-known Lyapunov function method and related concepts to the matrix function case within the framework of systematic stability analysis of dynamical systems (differential equations).
(6125 views)

Ergodic Optimization, Zero Temperature Limits and the Max-plus Algebra
by A. T. Baraviera, R. Leplaideur, A. O. Lopes - arXiv , 2013
We review some basic notions in ergodic theory and thermodynamic formalism, as well as introductory results in the context of max-plus algebra, in order to exhibit some properties of equilibrium measures when temperature goes to zero.
(4432 views)

Discrete Dynamical Systems
by Arild Wikan - Bookboon , 2013
This book covers important topics like stability, hyperbolicity, bifurcation theory and chaos, topics which are essential to understand the behavior of nonlinear discrete dynamical systems. The theory is illuminated by examples and exercises.
(5011 views)

Lectures on Topics In One-Parameter Bifurcation Problems
by P. Rabier - Tata Institute of Fundamental Research , 1985
This set of lectures gives a synthetic exposition for the study of one-parameter bifurcation problems. By this, we mean the analysis of the structure of their set of solutions through the same type of general arguments in various situations.
(6243 views)

Singularities of Transition Processes in Dynamical Systems
by Alexander N. Gorban - American Mathematical Society , 2004
This monograph presents a systematic analysis of the singularities in the transition processes for dynamical systems. We study general dynamical systems, with dependence on a parameter, and construct relaxation times that depend on three variables.
(6550 views)

Substitutions in Dynamics, Arithmetics, and Combinatorics
by Pierre Arnoux, et al. - Springer , 2002
A certain category of infinite strings of letters on a finite alphabet is presented here, chosen among the 'simplest' possible one may build, both because they are very deterministic and because they are built by simple rules.
(7632 views)

Valuations and Hyperbolicity in Dynamics
by Thomas Ward - University of East Anglia , 2001
These notes describe several situations in dynamics where the notion of valuations on rings provides a simple language in which to describe and exploit hyperbolicity. This approach goes a little beyond simply providing a convenient language.
(6134 views)

Entropy of Compact Group Automorphisms
by Thomas Ward - University of East Anglia , 2001
These notes cover a very short introduction to measure-theoretic and topological entropy, and are aimed at understanding part of Yuzvinskii's formula for the entropy of compact group automorphisms. Based on a course at the Ohio State University.
(5842 views)

Elementary Symbolic Dynamics and Chaos in Dissipative Systems
by Bai-Lin Hao - World Scientific , 1989
This is a monograph on chaos in dissipative systems written for those working in the physical sciences. Emphasis is on symbolic description of the dynamics and characteristics of the attractors, written from the view-point of practical applications.
(7234 views)

Introduction to Dynamical Systems: A Hands-on Approach with Maxima
by Jaime E. Villate , 2006
In this book we explore some topics on dynamical systems, using an active teaching approach, supported by computing tools. The subject of this book on dynamical systems is at the borderline of physics, mathematics and computing.
(7573 views)

Mathematical Principals of Dynamic Systems and the Foundations of Quantum Physics
by Eric Tesse - arXiv , 2011
This article will take up the question of what underlies the quantum formalism, whether it can be derived from simpler mathematical structures, and if so, what physical properties a system must possess in order for the formalism to hold.
(7680 views)

Optimization and Dynamical Systems
by U. Helmke, J. B. Moore - Springer , 1996
Aimed at mathematics and engineering graduate students and researchers in the areas of optimization, dynamical systems, control systems, signal processing, and linear algebra. The problems solved are those of linear algebra and linear systems theory.
(10653 views)

The Chaos Hypertextbook
by Glenn Elert , 2007
This book is written for anyone with an interest in chaos, fractals, non-linear dynamics, or mathematics in general. It's a moderately heavy piece of work, requiring a bit of mathematical knowledge, but it is definitely not aimed at mathematicians.
(10618 views)

The Hopf Bifurcation and Its Applications
by J. E. Marsden, M. McCracken - Springer , 1976
The goal of these notes is to give a reasonably complete, although not exhaustive, discussion of what is commonly referred to as the Hopf bifurcation with applications to specific problems, including stability calculations.
(10212 views)

Ordinary Differential Equations and Dynamical Systems
by Gerald Teschl - Universitaet Wien , 2009
This book provides an introduction to ordinary differential equations and dynamical systems. We start with some simple examples of explicitly solvable equations. Then we prove the fundamental results concerning the initial value problem.
(12918 views)

Dynamical Systems and Chaos
by Evans M. Harrell II , 2000
Class notes for an introductory course on dynamical systems and chaos for mathematicians, physicists, and engineers. The text concentrates on models rather than proofs in order to bring out the concepts of dynamics and chaos.
(11645 views)

Introduction to the Theory of Infinite-Dimensional Dissipative Systems
by Constantin I. Chueshov - ACTA , 2002
An introduction to infinite-dimensional dissipative dynamical systems. The book outlines a variety of tools applied in the study of nonlinear dynamical distributed systems. The results have applications to many areas of physics and engineering.
(8404 views)

Chaos: Classical and Quantum
by Predrag Cvitanovic - ChaosBook.org , 2008
This is a graduate textbook on classical and quantum chaos, applicable to problems of physics, chemistry and other sciences. It represents an attempt to formulate the subject as one of the cornerstones of the graduate physics curriculum of future.
(12626 views)

Invitation to Dynamical Systems
by Edward R. Scheinerman - Prentice Hall College Div , 2000
Author invites readers from a wide range of backgrounds to explore the beauty and excitement of dynamical systems. Written for readers who want to continue exploring mathematics beyond linear algebra, but are not ready for highly abstract material.
(13147 views) 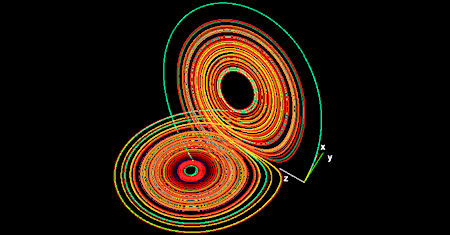